Peach County finishes as the GHSA Class AAA runner-up after a controversial call reversed a touchdown in the fourth quarter. 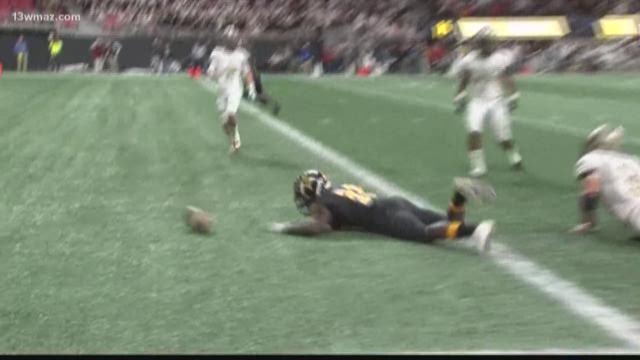 The Peach County Trojans finished as the GHSA class AAA runner-up after a controversial call in the fourth quarter of their state title game against the Calhoun Yellow Jackets saw an apparent touchdown catch ruled incomplete.

After a scoreless first quarter and a mostly scoreless second quarter, Peach Co. quarterback Antonio Gilbert threw a pick six to Calhoun's Brannon Spector to give Calhoun a 7-0 lead that they would take to the half.

Calhoun would add a field goal in the third to take a 10-0 lead before Peach Co. kicker Mitchell Fineran would drill a 50-yard field goal to bring the Trojans within 7.

After a fumble recovery later, Fineran would hit another field goal to make it 10-6.

Then in the fourth quarter, Gilbert would throw deep to Noah Whittington, who appeared to make the catch and take a few steps before crossing the goal line for a touchdown that would have given Peach County the lead, but the play was ruled an incomplete catch.

Peach County was not able to score for the rest of the game and Calhoun won 10-6.

After the game, Peach Co. head coach Chad Campbell was upset with the call.

"I think everybody else can say what they saw," Campbell said. "It looked like a catch and a score to me, but, you know, that's not what they saw. How do you tell 16, 17, 18 year old kids that you know, that a mistake like that cost them a state championship, maybe? It's a call we have to live with, move forward, you know, and it definitely doesn't feel good that's for sure and I just feel bad for our kids, the way we fought back and got back into the ballgame and had a chance to win, so, credit to our kids."

Warner Robins was scheduled to play for the AAAAA state championship against Rome at Mercedes-Benz Stadium, but that game was postponed due to inclement weather. It will be play Friday, Dec. 15 at 7:30 p.m. at McConnell-Talbert Stadium in Warner Robins.