Close to 40 helicopters from Fort Bragg are tied down at Robins Air Force Base. 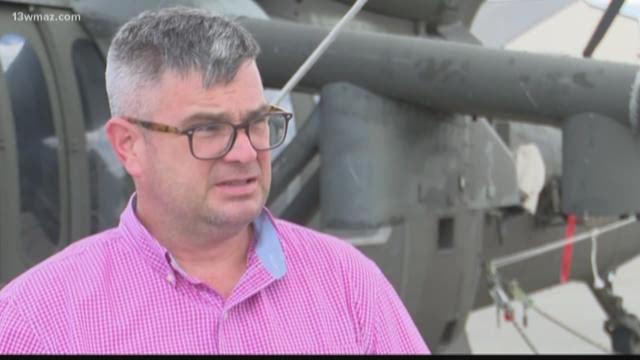 Plenty of aircraft are still in the skies over Robins Air Force Base, but a select few are grounded.

Paul Jordan, an installation reception officer at Robins, says "from Fort Bragg we have 31 HH60s (on base)."

Those Black Hawk helicopters, along with 7 Chinooks and a C17 airplane, flew south from Fort Bragg in North Carolina Tuesday night to try to get out of Hurricane Florence's path.

He says that damage if that happened would be costly.

"I don't have a monetary figure but I'm sure it's a million dollars or better a piece," he said."

The price of losing them wouldn't just be a financial one. According to Jordan, these aircraft will likely have an important mission once the storm passes.

"They'll probably be engaged in some search and rescue and recovery operations once (pilots) get them back up to North Carolina," said Jordan.

They might not be totally out of the woods though. Forecasts are moving the storm's potential path southward and Jordan says the helicopters may have take to the skies again to stay out of Florence's shifting trajectory.

"Depending on what happens with the storm that could be a possibility," he said.

That shifting forecast has already started to impact Air Force plans. According to base spokesman Roland Leach a group of search and rescue aircraft was planning to come to Robins Wednesday to stage for work in North Carolina. When forecast models shifted south, Jordan says those aircraft ended up going to Moody Air Force Base near Valdosta instead.