This week is Hurricane Preparedness Week in Georgia. Here's how you can get ready for the season

Atlantic Hurricane Season begins on June 1st. It's that time of year where we need to start paying to tropical forecasts, and get ready for the season ahead. 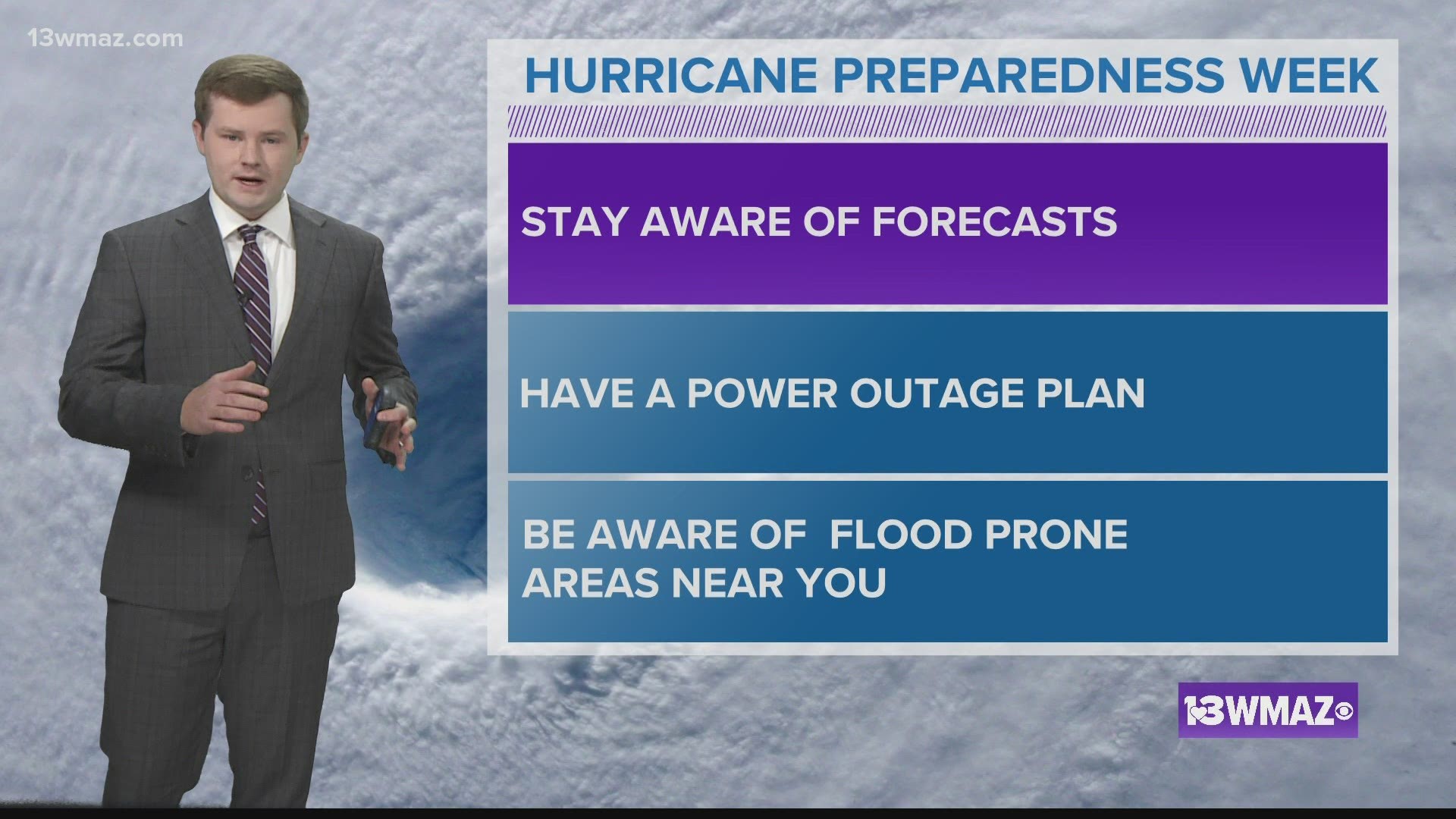 MACON, Ga. — This year, May 9th through the 15th is Hurricane Preparedness Week in Georgia. As we get closer to the start of Atlantic hurricane season on June 1st, it's an ideal time to start thinking about your plans during this hurricane season.

Central Georgia is not immune to tropical effects. Our area is in a unique location. We're not a coastal community, and we don't have to worry about threats such as storm surge and 100+ mile per hour winds. However, we are close enough to the coast to feel some wind gusts, heavy rain, and occasional severe weather from landfalling tropical storms and hurricanes.

The two most notable tropical systems to impact our area in recent memory would be Hurricanes Irma and Michael.

Irma made landfall in southwest Florida, but the wind field was so large that widespread wind gusts of 45-60m.p.h. were felt across central Georgia. Hurricane Michael made landfall as a category five hurricane near Mexico Beach, Florida, and was still a category one hurricane when it entered the 13 WMAZ News area. Both brought numerous power outages to our region.

Back in 1994, it was the infamous Tropical Storm Alberto and the catastrophic flooding it brought to our region. Alberto dumped over a foot of rain in a 24-hour period. Macon and several communities were without power and running water for days. Parts of the immediate Montezuma area were under 18 feet of floodwater.

Wind, and especially rain, are a threat to central Georgia each hurricane season. Here is how we can get ready for this season:

First, remain aware of tropical forecasts. In the modern era of weather forecasting, a tropical storm or hurricane will not come as a surprise. While the projected path my change over the course of a few days, and while the projected intensity of a storm may go up or down, a hurricane will not pop up and move through here unexpectedly. Stay aware of the forecast so you know what is coming our way.

Second, be prepared for power outages that may last several days. Downed trees and flooding may knock out power. This will lead to temperatures in your home rising and perishable food going bad. It's also a possibility that running water becomes unavailable as we saw with the flood of '94. Have enough water and non-perishable food to get you through an extended power outage.

Third, familiarize yourself with flood prone areas near you. With many tropical systems, we continue to go about our days. However, continuous, heavy rainfall often results in street flooding and the rising of rivers, creeks, and streams. If you live by a body of water, familiarize yourself with the different flood stages of that water source. Ask around to see which roads frequently experience street flooding. Once you know this information, avoid those flood waters! Remember, "turn around, don't drown!"

We'll get a better idea on how active a of a hurricane season we may be in for when N.O.A.A. releases their official forecast on May 20th. Regardless of the number of storms expected, know it only takes one storm to have a significant impact on a community.