'One of the rainiest days': Streets flooded, schools closed as Rosa takes toll on Arizona

With 2.24 inches of rain since midnight, Tuesday became 9th wettest day ever in Phoenix. 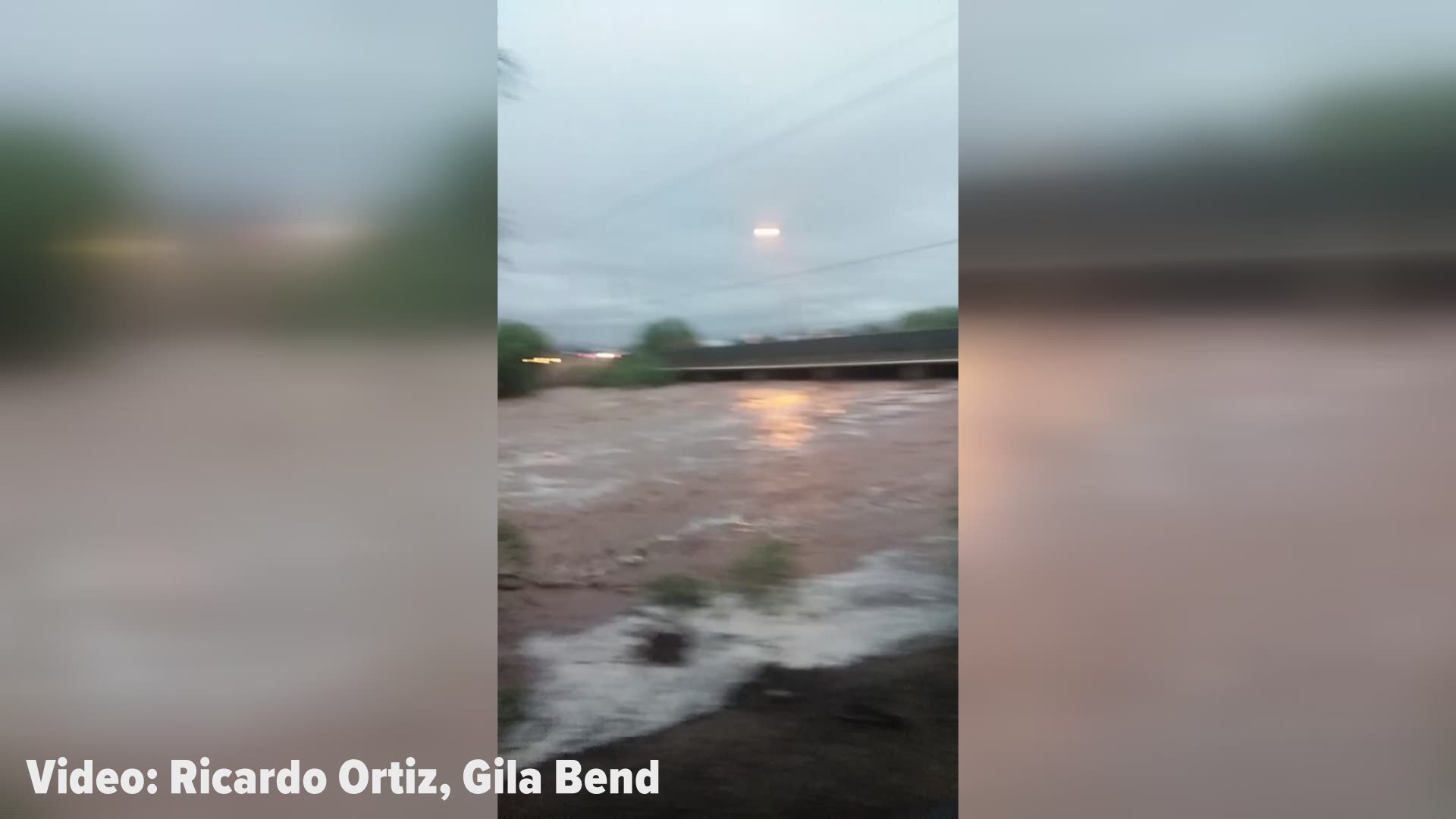 The Valley and other parts of the state were being soaked Tuesday morning as tropical depression Rosa shoved moisture across Arizona.

Rainfall began Sunday evening and continued throughout the beginning of the workweek, but the heaviest stuff was falling early Tuesday.

Warnings were issued Tuesday as streets flooded and some Valley schools closed.

NWS Flagstaff says "things are starting to quiet down this afternoon as the main moisture plume shifts east."

135 PM (MST) - Things are starting to quiet down this afternoon as the main moisture plume shifts east. There is still a bunch of water in the the Agua Fria from earlier rainfall, so use caution if traveling near the Agua Fria from Mayer, all the way to Black Canyon City. #azwx pic.twitter.com/GjWVzQREN5

Scottsdale firefighters are working to rescue a man from floodwaters near McDowell and Miller roads.

NWS Phoenix says the rain is "more scattered than before" with the heaviest hitting between Phoenix and Globe.

Rain is more scattered than before but given how saturated the ground has become it won't take much more rain to flood...heaviest showers b/w #Phoenix and #Globe. #azwx pic.twitter.com/gK5o8jmHYG

There are 25 road closures, including parts of 19th, 7th and 35th avenues, after this morning's rain in Phoenix:

Southbound Hayden Road is closed in Scottsdale between Chaparral and Camelback roads due to heavy rain and high water, Scottsdale city officials said.

Good Samaritans are filling sandbags and helping pull out vehicles in the aftermath of cars being stuck in a flooded street near Cholla Street and Tatum Boulevard.

This was Cholla & Tatum just a little while ago. The after math of cars stuck & a flooded street. Good samaritans filling sand bags & more good people helping pull out vehicles. #12News pic.twitter.com/prge4KpE7G

"One of the rainiest days on record," NWS Phoenix says.

According to NWS Phoenix, it's the second wettest October day and ninth wettest day ever with 2.24 inches of rain at Sky Harbor so far.

Phoenix just had its 2nd wettest October day and 9th wettest day ever with 2.24" (so far). #azwx pic.twitter.com/tHojYDAi0a

The Gilbert Fire and Rescue Department is investigating a false alarm at the Tutor Time at Recker and Guadalupe road caused by a rain leak.

Fire crews on scene at the Tutor Time at Recker & Guadalupe for reports of smoke inside the building. All children have been evacuated. No signs of fire of smoke found, investigating an alarm malfunction due to a rain leak.

The underpass at Peoria Avenue and the I-17 has reopened in both directions after it was flooded by the rain earlier in the morning.

UPDATE: I-17 and Peoria: Underpass at Peoria has reopened in both directions. #phxtraffic pic.twitter.com/NVM3fn1MK1

School has been canceled at Ashland Ranch Elementary School in Gilbert. School officials say the school is without power and parents are being notified to come pick their students up.

A flash flood warning has been issued for portions of central Navajo County.

1140 AM (MST) - Flash Flood Warning for portions of central Navajo county, including Dilkon and Indian Wells. This also includes low water crossings over parts of SR77 and SR87, as well as IR15 from Dilkon to Indian Wells. #azwx pic.twitter.com/hxSXwj3b12

City of Scottsdale says the Cactus Aquatic & Fitness Center is closed due to standing water.

#Storm Update: Cactus Park and Aquatic Center has been closed due to standing water.

Waterman Wash in the Rainbow Valley area has flooded the only road in and out of the area. Team 12's Nicole Zymek was told the people who live on the other side of the floodwaters are stuck until the water recedes.

Woah. Take a look at this wash. We’re in the Rainbow Valley area at Waterman Wash. This is the only road in and out, and I’m told the people who live in the other side are stuck until the water recedes. #12News pic.twitter.com/P0gtVnJ6KA

Over 1,500 APS customers affected by a service interruption to a major power line during storm from Cactus Road to Shea Boulevard and 44th Street to 52nd Street.

The Arizona Department of Public Safety says troopers have responded to more than 80 crashes this morning.

Spent the morning in the rain; made sure to protect a vital piece of equipment! (My passenger took the photo) Troopers have responded to over 80 crashes this morning; Please drive with care. pic.twitter.com/xKW4hYIXGZ

Rain to the north and west of Tucson, NWS Tucson says.

1051am: Currently scattered showers to the north and west of Tucson. Likely be a wet commute to Phoenix from Tucson. Expect this activity to continue into the afternoon hours. #azwx pic.twitter.com/B1FZCAntUT

Sky Harbor has received 2.22 inches of rain since midnight. A flash flood warning in effect for Maricopa County until 3 p.m.

1035 AM - Here are some 12 hour precipitation totals. Notice the maximum values (orange and red) extending from the Phoenix area northward into southern and eastern Yavapai county. Numerous reports of 3+ inches. #azwx pic.twitter.com/moOWT64xeu

City of Scottsdale says all unbridged crossing of the Indian Bend Wash are closed. Running water has closed McCormick Parkway between Scottsdale and Hayden roads.

#STORM UPDATES: All unbridged crossings of the Indian Bend Wash are closed. McCormick Parkway is closed due to running water between Scottsdale & Hayden roads. Avoid these areas. Always obey traffic signs & do not try to cross running water or flooded areas. pic.twitter.com/dWCgrifTvb

Majority of the rain is spreading north and east, according to NWS Phoenix.

"Remember, even if the rain has ended in your area, washes will still be running so use extra caution!" NWS Phoenix says.

1012 am: bulk of the rain spreading north and east. Remember, even if the rain has ended in your area, washes will still be running so use extra caution! #azwx pic.twitter.com/RpddFZlwAj

NWS Phoenix says today (so far) is the 10th wettest day ever for Phoenix.

Sky Harbor has gotten 2.13" of rain so far today, making it the 10th wettest day ever and the 4th wettest October so far. #azwx https://t.co/jIMk49Zr05

Sky Harbor has recorded over two inches of rain today, making it the 5th wettest October (so far) in Phoenix.

We have officially gotten 2.03 inches of rainfall at Sky Harbor today. This makes it the 5th wettest October so far.... emphasis on the so far! #azwx https://t.co/om28QBFp3M

UPDATE: SR 51 at Cactus: Flooding has subsided on SB side and traffic is getting past. Still some standing water on NB right lanes. Highway remains open in both directions. #phxtraffic #azwx pic.twitter.com/MkXW1c71aQ

Rainfall total in Phoenix continues to climb. It's now at 1.67 inches. NWS Phoenix says this is already the 8th wettest October on record.

We are only 2 days into October and Sky Harbor is already sitting at the 8th wettest October on record with 2.08" of rain so far. #azwx

NWS Flagstaff is warning of heavy rain accumulation, 1 to 2.5 inches in some areas, between Flagstaff and Phoenix.

8:50AM MST: Moderate rain over the past couple hours has led to heavy rain accumulations between Flagstaff and Phoenix, especially around and south of Cordes Junction (1.5 - 2.5"). Be alert for high water in area creeks and streams, and water on roadways! #azwx pic.twitter.com/FNAqlISTGe

And Phoenix has officially crossed the inch and a half mark for total rainfall today.

Phoenix's rainfall total keeps rising (now at 1.43 inches) as radar shows most of the rain across the central Valley.

827 am: Radar shows most of the rain across the central valley. Be aware and use extra caution. #azwx pic.twitter.com/2rNxnpHUQh

A third elementary school, Rainbow Valley Elementary School in Buckeye, has closed today due to flooding.

Phoenix has seen over 1.21 inches of rain so far this morning with more still to come.

Desert Horizon Elementary School in Phoenix is closed due to severe flooding. According to a message on the school website, the school is closed as it assesses the damage caused by the flooding.

Due to the storm, Rio Vista Elementary has no power or phones. For the safety of our students and staff, the school will be closed today. We ask that parents come and pick up their students. A robo-call has gone out to the effected communities. Please, be careful out there!

Today's rainfall record of .60 inches set back in 1981 has been broken at Phoenix Sky Harbor, which has recorded over an inch of rain since midnight.

A flash flood warning has been issued for the Valley until 10:30 a.m.

Peoria Avenue is closed in both directions at the I-17 because of flooding.

A flash flood warning is in effect for Maricopa until 1:15 p.m.

Cordes Junction has seen .74 inches in the last 6 hours while Sunset Point has seen .66 inches and Payson .57 inches.

The Urban and Small Stream Flood Advisory Remains in Effect until 1015 AM MST for Maricopa and Pinal Counties. https://t.co/1zqdOcYTzr #azwx #cawx pic.twitter.com/UqT256Lukg

NWS Tucson says the "main focus of precipitation" is west through north of the Tucson metro area. Scattered showers and isolated thunderstorms are expected to continue across southeastern Arizona this afternoon and evening.

Main focus of precipitation associated with Tropical Depression Rosa (at this time) remains west through north of the Tucson metro area. Expect scattered showers and isolated thunderstorms across much of southeast Arizona this afternoon and evening. #azwx pic.twitter.com/eh7lVGokT2

Phoenix is nearing that inch mark in terms of the rainfall we've seen so far courtesy of tropical depression Rosa. And more is still to come.

The record rainfall for today is .60 inches set in 1981. That record should be broken today.

National Weather Service Flagstaff says significant rainfall is expected in some areas of Northern Arizona, but "forecast totals are considerably lower than previous forecasts." Flagstaff now forecast to see up to an inch while the greatest amounts will be along and south of the Mogollon Rim at 1 to 2 inches.

A flash flood warning has been issued for Gila Bend and surrounding areas until 9:45 a.m. A urban and small stream flood advisory is in effect for the Valley.

The roads around the Valley are soaking wet this morning, and if you forgot that umbrella walking into work, you probably got drenched.

Showers will continue through the morning, with brief pockets of some heavier precipitation.

3:25 am: Light to moderate rain is now falling in Phoenix as remnants of Rosa move inland. Expect precipitation to continue this morning with brief pockets of heavy rain. #azwx pic.twitter.com/uJsnXRjeAo