'Just one of the classiest moves I’ve ever seen. Hard to truly prepare for something like that. So, I would say thank you,' Arkansas State coach Blake Anderson said. 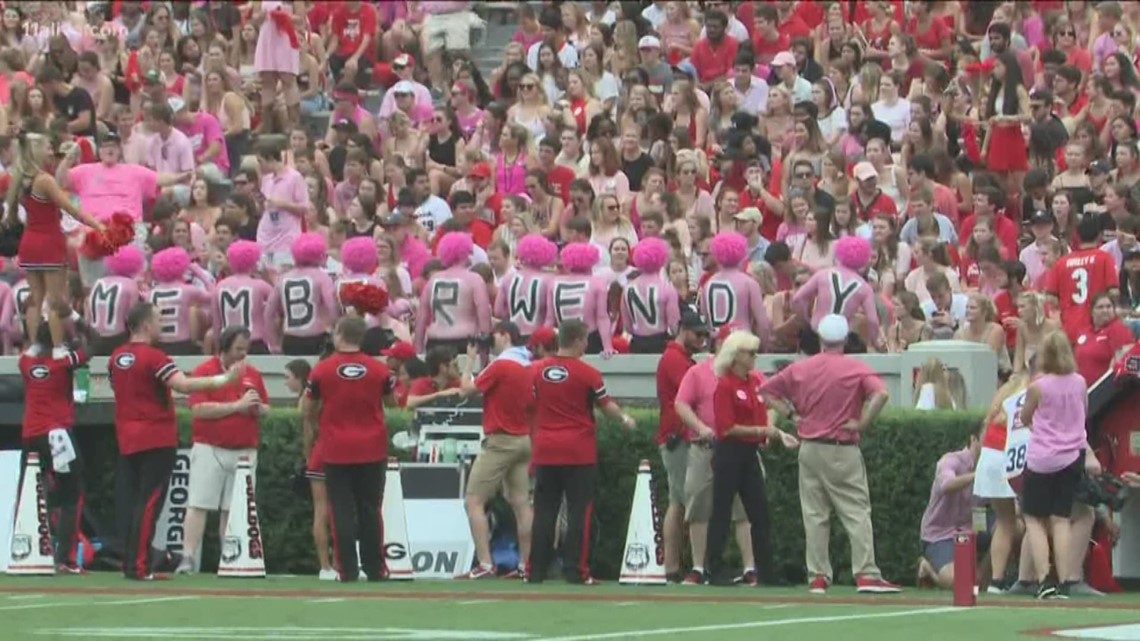 ATHENS, Ga. — The Georgia Bulldogs put up a decisive 55-0 win against Arkansas State Saturday to improve to 3-0. But the day’s game was about more than football.

Thousands of fans showed up in pink, not their team, but to support the head coach of the opponent. It was thanks to a couple of fans who learned his story and took it to heart.

It started with a tweet. A simple plea to wear pink.

Dwight Standridge from the Bulldogs Battling Cancer charity was compelled.

“I saw the story about coach Anderson, and his wife passing away from breast cancer three weeks ago,” he said.

Blake Anderson lost his wife, Wendy, to breast cancer after 27 years of marriage. Less than a month after her death, Anderson returned to coaching.

The idea of a pink-out went viral. Retweets and endorsements followed including one from ESPN’s Scott Van Pelt.

“I knew Dawg National would show up and show out,” he said.

"She’s a 15-year survivor. I lost my mom to ovarian cancer,” he said. “At the end of the day, I think my mom and Wendy Anderson will have their arms wrapped around each other today.”

Dawg fans didn’t disappoint. Fans flooded the stands in a sea of pink.

"It’s just helping someone else out going through the battle,” Dwight said.

And it didn’t go unnoticed.

“Just one of the classiest moves I’ve ever seen. Hard to truly prepare for something like that. So, I would say thank you,” Anderson said.

“I’m rooting for Georgia the rest of my life for that,” Arkansas State player Jacob Still said. “They didn’t have to do that and they did, what we’re doing here is bigger than football.”

“It’s that energy that keeps me going,” he said. “I don’t want to let her down or her legacy.”

″(Blake Anderson) is a great person and I have a lot of respect for him,” said UGA coach Kirby Smart. “He’s such a wonderful person. I can’t imagine what he’s been through. Our fans showed up and showed out. It was a great turnout and I’m so proud they embraced a program that has been through some tough times.”

No. 3 Georgia romps to another win, 55-0 over Arkansas State