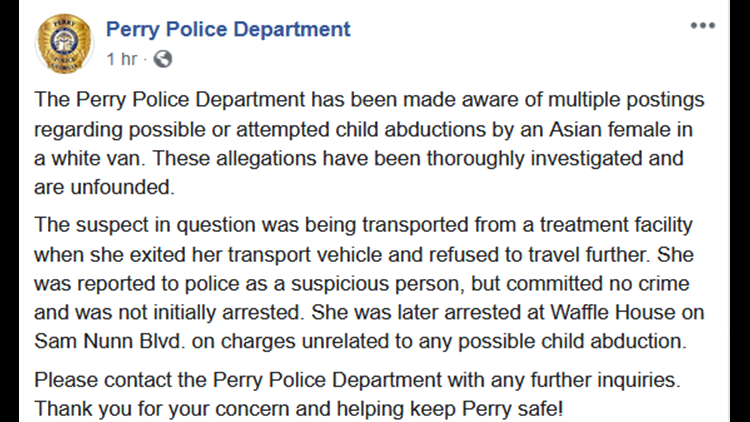 WARNER ROBINS, Ga. — Over the weekend, multiple Facebook posts alleged that an Asian woman was seen attempting to abduct children in retail stores and parking lots across Central Georgia.

On Sunday night, Perry Police posted to their Facebook page, saying the allegations had been investigated and are "unfounded."

"The suspect in question was being transported from a treatment facility when she exited her transport vehicle and refused to travel further. She was reported to police as a suspicious person, but committed no crime and was not initially arrested. She was later arrested at Waffle House on Sam Nunn Boulevard on charges unrelated to any possible child abduction."

Another Facebook post alleged an incident involving a white van following a woman in the parking lot at a Warner Robins Kroger.

Warner Robins Police Chief John Wager says law enforcement is aware of the post, but at this time his officers are not "on the lookout" for any white vans.

RELATED: Police: He tried to kidnap a child at a Walmart. It happened in the bathroom.